Can Bodybuilders Get An Edge With Plastic Surgery?

ABC 6 News in Columbus recently told the story of Yvonne Melendrez, a woman competing in the Arnold Fitness Expo who says she chose a breast augmentation to achieve “balance.” 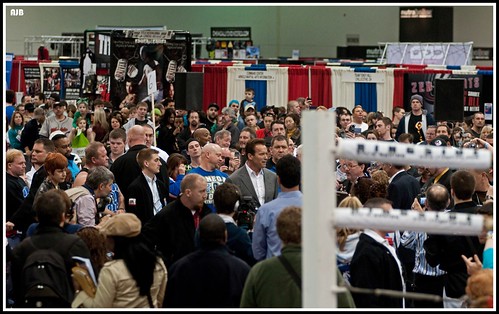 People gather around Mr. Schwarzenegger during the Arnold Fitness Expo. Photo Credit: Arnold! by A. Blight, on Flickr

She tells reporters that although she feels great and has been training for years, she doesn’t have the same chest or the support anymore. A breast augmentation would help her feel better about herself, while helping her compete in shows.

Columbus plastic surgeon Dr. Jeffrey Donaldson says that in addition to breast surgery, he has seen demand from the fitness crowd for procedures like liposuction, Botox and Restylane.

Breast Augmentation for Balance and Proportion

Proportion is an important factor for image-conscious athletes like Ms. Melendrez. The problem is that breast size may decrease over time, especially with intense physical training.

“In the case of a female athlete who loses breast volume while she’s training to increase her musculature, then it may be appropriate to recreate that breast that’s been lost,” Dr. Donaldson said to ABC 6 News.

When it comes to balance and proportion of the body, a breast augmentation can make a big difference. Breast enlargement can improve overall body proportion, and also help correct a size discrepancy between a patient’s breasts.

The Ethics of a Fitness Competition

Is it fair for competitive bodybuilders to undergo cosmetic surgery? According to Ms. Melendrez, it is fair if they undergo “minor surgical changes that won’t be judged.” Anything beyond that would be unethical.

People have the right to enhance their body to feel better about themselves, but once they enter the competitive arena, they have to abide by certain rules.

Several major cosmetic procedures have been developed that go beyond restoration of normal shape. Procedures that use body implants like pectoral, calf or deltoid augmentation would likely be considered a breach of the competitive bodybuilder’s ethical code. After all, bodybuilding is about taking the time to train your body to enhance both physical performance and muscular physique. A sedentary person who has implants would not be considered a bodybuilder.

Kandy | Eyelid Surgery Patient
"Bottom line I did this just for me!" (Read More)